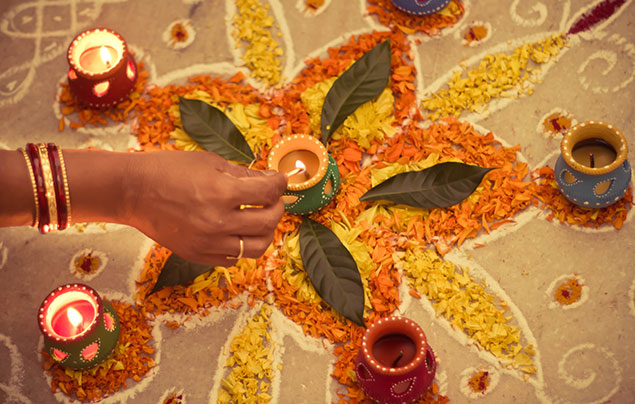 Diwali, known as the “Festival of Lights”, is a five-day celebration that marks the Hindu New Year, commemorated by Hindus, Sikhs, Jains and Newar Buddhists (in Nepal) occurs in October or November each year. It is based upon a lunar calendar.

Its origin has been attributed to several recounts and here are some of the most popular ones:

– In the Northern parts of India, it is believed that this was the day when Rama (Vishnu) freed his wife Sita (Lakshmi) from the evil king who encaptured her in the land of Lanka. He garnered the help of monkeys, led by Hanuman, to build a bridge over to Lanka, invaded and defeated the evil the king. Upon return to their city, Ayodya, they celebrated her homecoming and the victory by igniting lights all over the land.

– In Southern India, the story celebrates the victory of Krishna who destroyed an evil king, Narakasura in modern day Assam, freeing 16,000 women from his slavery. Today, Naraka Chaturdasi is still celebrated as the day before Diwali.

– In the western state of Gujarat, the Gujerati New Year coincides with Diwali. Even as there are many ethnic groups in India, each may celebrate their own new year and the dates do differ. Here, Diwali is the day when devotees would request for prosperity , success and good health from their goddess Lakshmi (Vishnu’s wife) for the coming year. Interestingly, during the festival, many celebrants exchange gifts and coins.

– Sikhs celebrate Bandi Chhor Divas in remembrance of the release of Guru Hargobind from the Gwalior Fort prison by the Mughal emperor, Jahangir, and the day he arrived at the Golden Temple in Amritsar.

– The Bengalis celebrate the victory of the goddess Kali over evil on this day.

In order to commemorate this day, Diwali is celebrated with fireworks being set off all over the world. Hindus also take an oil bath at the dawn of each festive day. The lighting of lamps remains a practice today in celebration of this festival, which is attributed to the story of Rama and Sita. Diyas (in Sanskrit) or light symbolises illumination and signifies the energy and light from the sun.

Another significant emblem is the drawing on the floor, known as Rangoli. Rangoli is a beautiful artwork where patterns are created on the ground using coloured rice, dry flour, coloured sand or flower petals. Designs are passed from one generation to the next, keeping both the art form and the tradition alive.

Although the stories behind the reason for why various ethnic groups or faith may differ for this celebration, nonetheless the festival represents the same symbolic victory of light over darkness, knowledge over ignorance, and good over evil.