The Complexity of Assam Laksa 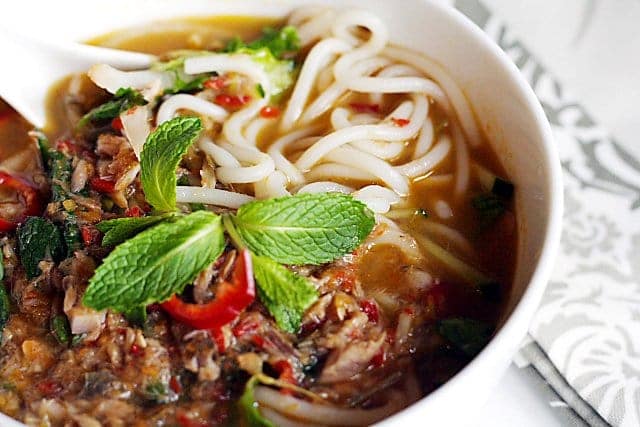 It is no surprise that the assam laksa has been ranked 7th among the world’s 50 most delicious food according to CNN travel. Assam laksa is one of my absolute favourite authentic Malaysian dish. This delectable dish is known to originate from Penang island. You don’t find the assam laksa commonly made at home because it is such a complicated dish. I am definitely among the fortunate few to have a grandmother and father master the dish. Each time there’s assam laksa at home, I have no less than two servings per meal. It is so addictive!

This dish reflects the influence of Chinese and Malay cuisine. The proper term for it would perhaps be ‘Peranakan’. The story behind the name ‘laksa’ is uncertain. Some suggest that it could be derrived from the Chinese words for ‘spicy sand’ due to the sandy texture of the broth. Others believe it comes from the Hokkien word for ‘dirty’ which describes the appearance of the dish. Another notion is that it comes from the Hindi word ‘lakhshah’ which is a type of vermicelli. One thing we can be sure of is that it’s a true Malaysian dish!

What makes it so tantalising? The combination of the sweetness of the mackerel, the invigorating tanginess of lemongrass and ginger flower, the sourness of assam paste and leaves and chilli for spice equates to a dish of perfection. Garnish with julienned cucumber, sliced red onions, mint leaves, diced ginger flower and prawn paste and you’ll be in heaven!

It is a complicated dish indeed because getting the right balance is tough unless you have the tastebuds for it. The most important ingredient is the fish. Some people would opt for sardine because they’re easier to debone but I assure you, mackarel gives the best flavour. Every part of the fish is important. First the fish is boiled until cooked. The water from boiling is then used for the broth. After that, the fish are deboned and the bones are pounded to be boiled again – a crucial step for complete flavour. Don’t worry about it tasting fishy. The lime balances it all.

The way some believe that the word ‘laksa’ originated from the Chinese words for ‘spicy sand’, is almost how the texture of the broth should be like. This sandy taste could be due to the flakiness of the fish and the blended ingredients such as chilli, ginger flower and lemongrass. If this texture is not achieved, the broth could be too watery. Knowing how intricate this dish is, I deeply appreciate every bowl. Now that you know as well, I hope you do too!